December—it’s a good time to reflect on the year’s accomplishments and on goals for the new year. Right? Here are mine, related to genetic genealogy.

☑ developed the DNAsleuth website and met my commitment to blog monthly.

☑ got the Central Indiana DNA Interest Group up and running. We meet monthly, usually at the Fishers Library, and we also offer ‘outreach’ programs to organizations within a 50-mile radius. (Special thanks to my co-leaders Angela, Andrea, and Denise; and to everyone who has participated in our lively Q/As and offered ideas.)

☑ completed ProGen 25: an 18-month program in professional genealogy. While its focus isn’t genetics, I completed many assignments using DNA. Thank you to our leaders and colleagues who made that so worthwhile. 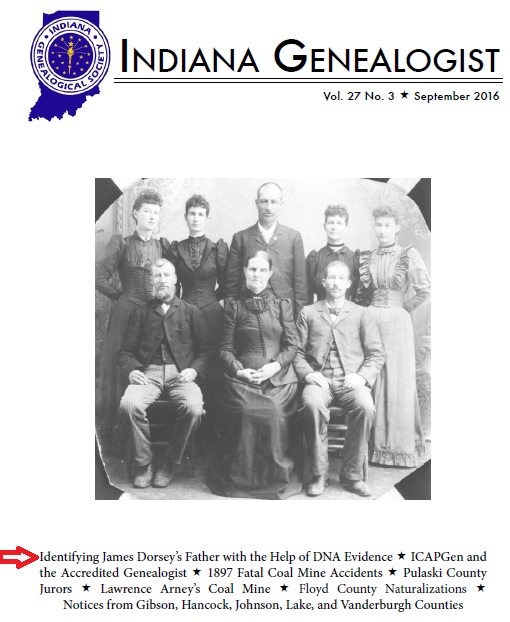 2016 was a year where I made a lot of progress on chipping away at brick walls, but most of my cases will carry over to 2017 before I can draw conclusions. Here are some of those projects:

My African-American cousins: I have a DNA match with an African-American family. Through our efforts this year, I’m now about 75%(?) confident that I’ve identified the line in my family that intersects with theirs and determined that our common ancestor likely was born before 1790. (Note to self: see Teresa Vega’s great blog post “DNA Doesn’t Lie: The Denial of the Pepper in Salted Histories” from 4 Dec 2016 here.)

My Irish origins: I have 8 great-great-grandparents who came from Ireland, all but one  emigrated in the 1840s or early 1850s. Some of their roots are more elusive than others. In three lines, I don’t even have a clue where in Ireland they came from. Re: adding DNA to my genealogy toolkit for these, it’s been a matter of trying to identify and recruit some 2nd or 3rd cousins who share those immigrant ancestors, and then we… wait. We wait for other people to test who match both of us. !n 2016, we made real progress in discovering new Flynn cousins. We’re getting close to finding that county and townland/village origin! And in other news, through DNA testing, I was able to meet a 3rd cousin once removed on my Gleason side who has a photo of our immigrant ancestor she was willing to share – thanks, Sue and Len!

Other brick walls: I’m using Y-DNA and autosomal DNA for a Griffith proof argument. There is still more DNA analysis and more documentary research to come, but DNA results so far suggest that I’m on the right track. Other projects moving forward include my Jennings line. No updates on Jameson, McCurdy, or Davis dead ends. My Hammond hypothesis was mostly *disproven* with DNA: see my blog post here. (But that’s valuable too!) Other brick walls have not been a priority for 2016.

Chromosome mapping: I have been working on this off and on for a year, but I’m getting close to having something to share. Look for a lot more on this in 2017.