Last month when we left off, we were comparing three siblings’ DNA on chromosome 11, which produced the following ‘map’.  See Image 1. (If you’re just joining us, please see Chromosome mapping with siblings, part 1 first.)

Let’s focus on what’s happening around the place where Margaret and Ann’s first matching DNA segment ends—GEDmatch identifies that as 107,490,079. I’ll call it 108 for simplicity.

Margaret and Ann went from matching on either the paternal or maternal copy of chromosome 11 to matching on neither. Therefore, something happened around that spot: Ann or Margaret had a crossover event.

(Remember, Mom has one copy of chromosome 11 from Grandma and one from Grandpa. Before she passes down just one copy to her children, those two copies are twisted together and a “recombined” one gets created. It may be Grandma’s DNA at the beginning and Grandpa’s at the end, with one twist (crossover) where they switched. It might be Grandpa-Grandma-Grandpa (two crossovers). There might be zero crossovers (all the DNA on that chromosome came from one grandparent and none from the other.)  There might be three or even four crossovers on a single maternal or paternal chromosome. The same thing is happening with the chromosome 11 we get from Dad.)

Here it looks like Margaret and Ann had DNA from the same grandparent before 108, and beyond that point up to 130 their DNA came from different grandparents. Margaret and Brian don’t show any activity in that stretch, so apparently nothing changed there for them. Ann and Brian went from matching on just one copy of chromosome 11 to matching on both copies. So, one of them had a crossover there. Since Ann was involved in both cases where we saw changes, it seemed likely that it was one of her copies of the chromosome that switched from one grandparent’s DNA to the other’s…

… until we look at cousin matches in order to assign specific grandparents to the segments.

Second cousins are very valuable for this. Our parents’ first cousins can be even better! (We share more DNA with these 1st cousins once removed; some segments shared on most chromosomes.) These cousins match us through only one of our four grandparents, perfect for assigning grandparents to the DNA segments where we match.

In this case, it’s Mom’s paternal 1st cousin John who plays a key role here. Margaret matches John for a total of 565.3 cM; this includes a large segment on chromosome 11 from 76 to 107. We have another document-confirmed relative, James (a strong 4th cousin match), on Mom’s maternal side. Margaret matches James on three chromosomes for a total of 69.2 cM; this includes a stretch on chromosome 11 from 109 to 116. Both these segments on chromosome 11, the one matching Grandpa’s relative John and the one matching Grandma’s relative James, are above GEDmatch’s default thresholds. It appears clear that Margaret has DNA from her maternal Grandpa before 107 and from her maternal Grandma after 109. Margaret must have a maternal crossover there.

How can this be? It seemed in last month’s post that Ann should have this crossover. After all, Margaret doesn’t show any change with Brian in this stretch….

If both Margaret AND Brian had a crossover around 108, this would support all of the results shown.  For example, suppose it’s their paternal copy of chromosome 11 where Margaret and Brian don’t match for a long stretch before and after this point. Margaret’s DNA here may be from their father’s mother (Nana) while Brian’s may be from their father’s father (Granddad). On their maternal copy, before 108, Margaret’s DNA may match their mother’s dad (Grandpa), and Brian’s may match their mother’s mom (Grandma). Around 108, they both had a crossover on their maternal copy. At that point, Margaret now matches Grandma and Brian matches Grandpa. So—they continue not matching each other at all, on either paternal or maternal copy, from well before 108 to 130.

Likewise, if both Ann AND Sheila had a crossover around 108 (instead of Margaret and Brian), then all of the results shown above could be valid.  Similar explanation.

Given that Margaret’s matches dictate that she must have had a crossover, we can tell which scenario it is. It wasn’t Ann that had a crossover around 108, as first thought. Instead, it was both Margaret and Brian.

Drawing lines for the four siblings now results in the crossover points shown in Image 3. There were two other places where more than one sibling had a crossover event, at 14 and 21. A similar process was used as described above, using matches with known cousins, to determine which siblings had the crossover. The numbers along the top show the approximate position. The initials along the bottom show which sibling experienced the crossover. (Last month’s post theorized that the crossover at 14 belonged to Brian. Here we see it more likely happened to both Margaret and Ann instead.)

(You may notice that some segment ends don’t line up exactly. For example, in the B-S and A-S images, the line for 71 doesn’t fit quite right. This is an issue with the graphic methodology used. GEDmatch reports that point as 71,963,804 for both the one-to-one between B-S and the one-to-one between A-S. See the Notes section at the end for more discussion on this.)

In Image 4, you can see the almost-finished chromosome map, showing two copies of chromosome 11 for each sibling and where the crossovers between grandparents occurred. 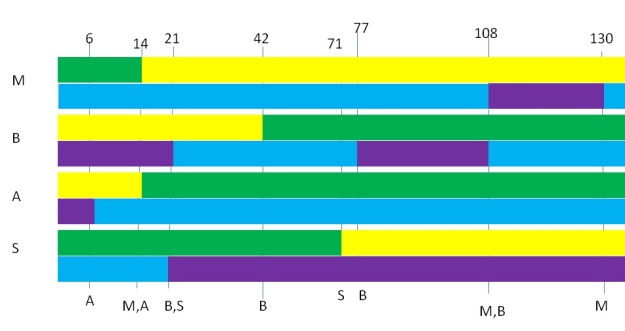 And now, in Image 5, the surnames of the grandparents are plugged in, based on those cousins who match.

How is this useful?

A previously unknown relative, Jen, appears in our match lists. GEDmatch reveals that she matches both Margaret and our maternal first cousin Lisa from 122-130 (17.6 cM, 2619 SNPs) on chromosome 11. (Jen also matches Lisa on a different chromosome, with a prediction that they are possibly fourth cousins.) The fact that Jen triangulates with Margaret and Lisa on the same segment tells us that they have a common ancestor on Margaret’s maternal line.

Having mapped chromosome 11 to the grandparents, we know that Margaret’s maternal DNA in that segment from 122-130 came from her grandmother Mary Darcy. So Jen should share a common ancestor with Margaret and Lisa on their Darcy line.

If this mapping is correct, then Jen should also match Sheila there and not match Brian or Ann. And in fact, those one-to-one comparisons come out exactly as expected.

Segment ends can be slightly off from where the line is drawn. That may be due in part to the manual process of stacking images that have been screen-captured from GEDmatch, cropped, and then copy/pasted and resized to fit the page. Some of the ‘rough edges’ may be due to the science itself. As Jim Bartlett says, “The ends of the shared segments are a little fuzzy,” and offers a technical explanation in his 30 May 2015 Segment-ology blog post Fuzzy Data, Fuzzy Segments – No Worry.

At times, David Pike’s utility Search for Shared DNA Segments in Two Raw Data Files was used to confirm values at crossover points when swapping from matching on one copy of the chromosome to both copies or vice versa, for which GEDMatch doesn’t provide numerical data, just color coding.

I have also tested a fifth sibling, Alice, but omitted her results here in the interests of simplicity. Her results comply.

To double-check my mapping, I compared each sibling’s assigned-grandparent segment against close cousins’ DNA. On our paternal side, I have tested my dad’s brother, his 1st cousin, and two of my 2nd-3rd cousins. On our maternal side, I have tested my mom’s sister, her brother’s daughter, a 1st cousin of Mom’s, and I’ve found or recruited 6-8 people in my 2nd-3rd cousin range and another 7-8 in the document-confirmed 4th-5th cousin range who have taken DNA tests. The grandparent assignments on the map conform to all of those relatives who share DNA with us on chromosome 11. (However, as yet we have no confirmed maternal DNA cousin matches before position 21 on this chromosome—this 0-21 section will bear watching in the future. We do however match Dad’s paternal 1st cousin in this section, so I’m able to complete the map by process of elimination. ) As always, however, I will continue to monitor the grandparent assignments as new matches are discovered.