In the U.S., we celebrate Memorial Day near the end of May, honoring the men and women who died in the service of our country. With that in mind, I’m running my June 1st blog post a few days early, to feature an interview with Emma Compton, a genealogy professional who can tell us about her role bridging genealogy and DNA to bring some of our lost heroes home.

First though, here is a flashback to a vacation I took in 2002, exploring WWII battlefields. One day we hiked the Kall Trail deep in the Huertgen Forest in Germany. A family member had been wounded in that horrific battle. As my friend and I tromped through the woods, skirting the occasional remains of ruined bunkers and rusty barbed wire, we suddenly came across this grave-sized mound of rocks. 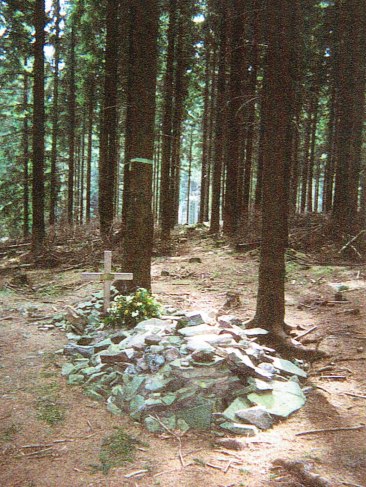 A plaque reads “In memory of Pfc Robert Cahow, K Company, 311th Inf Reg. 78 Inf Division. KIA 13 Dec 1944. His body lay in this grave for 56 years; his whereabouts known only to God. He was one of 78,976 Americans who are Missing in Action from World War II. In April 2000, his remains were found and returned to his family in the United States. May those who remain never be forgotten.”

Robert Cahow died in a mine explosion. I don’t know that DNA was involved in identifying him in 2000, but DNA is a very important tool in similar cases today. I have been honored to assist in a WWII repatriation case myself: seeking kin of a flight crew member who died in a plane crash in Belgium.

My colleague, Emma Compton, has been doing this kind of work for several years, so I asked if she would answer some questions about it.

Q1. What is repatriation?

Military repatriation is an ongoing effort to bring home the remains of unaccounted for U. S. military service members that died during WWII, Korea, and Vietnam. Genealogists are used to help find the current legal next of kin and family DNA donors for the service members.

Q2. Can you describe what kind of things you do when you are given a case?

All of the military repatriation cases that I have worked on to date have been U. S. Army WWII cases. With these cases in particular, the information in the soldiers’ files usually only goes up to the 1940s and perhaps 1950s, so there is the need to find out who the current next of kin are and also locate family members who are eligible mitochondrial and Y-DNA donors. When I’m given a file, I take any useful genealogical information that is included: usually at least the soldier’s name, date of birth, home address at the time of enlistment, and their emergency next of kin or beneficiary’s address; and I start researching to build out their family tree and find the necessary people. Records we typically use include census and vital records, city directories, and newspapers, which enable us to work forward in time to find the living family members. We look for the two closest next of kin, three mitochondrial DNA donor candidates, and one Y-DNA donor candidate. Sometimes family members fill more than one role, for example a niece or nephew may be next of kin and also a candidate for a mitochondrial DNA or Y-DNA donor, but other times you have different individuals filling each specific role.

Making the initial contact with the family members that we locate to make sure we have the correct person is part of the work. Sometimes the soldier was old enough to have been married and there are surviving children or grandchildren and sometimes there are siblings that are still living. More often the family members are nieces, nephews, and paternal or maternal first or second cousins. The farthest I have had to go out was to a third cousin for a DNA donor candidate and of course when you are dealing with cousins that far out, they usually aren’t even aware of their connection to the soldier, which can make contacting them very interesting! My preference is to first mail a letter to the family member wherever possible, but I do have colleagues that go straight to making phone calls. We each have our own way of doing things and what we feel comfortable with. The most important thing is to be able to confirm we have the correct family members and relationship connections to the soldier to put in the report.

Q4. Can you give more detail about how DNA testing is used in these cases?

When we are looking for DNA donors the priority is for finding mitochondrial DNA donor candidates because they are the most important for making the identifications. With the nature of remains, where samples can be retrieved, you are dealing with older and degraded DNA and often mitochondrial DNA is the only remaining DNA that can be compared with the family donors. Y-DNA can sometimes be used but it’s not always successful. The type of autosomal DNA testing that we are all familiar with through the commercial testing companies doesn’t work in these cases because of the quality of samples from the remains. If we find very close living relatives, like children or siblings of the service member, I believe they do take autosomal DNA in case they can use it, but mitochondrial DNA remains the main way to currently identify remains, so those are the DNA donors that we focus on trying to find.

Q5. Can you describe how you got into this specific type of work? What kind of training you had for this?

When I first became interested in genealogy I found out about a volunteer group called Unclaimed-Persons.org that helps coroners and medical examiners to find next of kin for their identified but unclaimed remains. I became a volunteer and that’s where I learned the skills necessary to look for living people. There was also a forensic module in the Boston University online Certificate Program that I really enjoyed and which helped me decide to pursue forensic genealogy as a specialty. I’ve also done some heir research for estates and oil/mineral rights, which uses the same skill set, so when I got the opportunity to work on military repatriation cases, it was a logical progression that built on my past volunteer work and educational experience. A couple of very useful webinars about military repatriation have been done by genealogists specializing in the field. Jeanne Bloom, CG has a webinar available through Legacy Family Tree called “Past Conflict Repatriation: The Role of Genealogists and Methodology in Fulfilling Our Nation’s Promise” and Ruy Cardoso, CG (a colleague of mine at Stone House Historical Research) also has a webinar recording which can be found in the members section of the APG website called “War Stories: Tales from Military Repatriation Research.” They were both very helpful in touching on aspects which were unique to repatriation work, like the need to know about inheritance patterns for mitochondrial and Y-DNA and also making the phone calls to family members because that was something that I hadn’t done before. The phone calls are still the trickiest part of the job because you never can anticipate what kind of reaction you’ll get. Some people are happy to help and others will just hang up on you!

Q6. When you complete a case, do you ever find out if family members were found and what was done with the soldier’s remains?

In our capacity as researchers, we are not made of aware of the status of the cases we receive, whether there are currently remains that need identifying or if there is possibly work going to be done in an area where they expect to find remains. That carries through to after submission of the report. Unfortunately we don’t necessarily find out if the research or subsequent DNA testing results in an identification. However, the DPAA (Defense POW/MIA Accounting Agency) has a website (https://www.dpaa.mil) where they regularly post the service members that have been recently accounted for. I keep a note of the soldiers’ names whose cases I have worked on, so I periodically check to see if any of them are among those recently identified. I haven’t had any yet but I’ve only been working on military repatriation cases for about two and half years and the process can take several years.

Thanks for sharing, Emma!

For more information about how the Defense/POW Accounting Agency uses DNA in this important effort, see https://www.dpaa.mil/Resources/Fact-Sheets/Article-View/Article/590581/armed-forces-medical-examiner-system-dna-identification-laboratory/.