One of the first things we ask about a new DNA match is this: is this a match on Mom’s side, or Dad’s?
We all have two copies of each autosome (i.e. chromosome 1 through chromosome 22): one copy in each pair comes from Mom and one from Dad. Unfortunately, the testing company can’t tell by looking at our DNA if a segment that matches someone else is on our maternal copy of that chromosome, or our paternal copy.
We need to compare our DNA to known relatives who have tested; then we can begin to figure out how our new matches fit in our family trees.
If you’ve had both of your parents take an autosomal DNA test at the company where you and your new cousin match, it’s easy to tell maternal or paternal. But what if you don’t have DNA tests for both parents?
GEDmatch.com has some tools to help us.
GEDmatch.com is a (mostly) free 3rd party site with lots of helpful utilities, some specific to this issue. They don’t process DNA samples; people who test at a DNA company can download their raw data from that company and upload it to GEDmatch. That means people who have tested at AncestryDNA can use GEDmatch to compare their DNA to people who tested at 23andMe, FamilyTreeDNA, MyHeritage, and so on. GEDmatch tools can help us assess our DNA matches with these other testers–but only with testers who have also uploaded their own data to GEDmatch.
Once we have copied our raw DNA data to GEDmatch, here are some tools we genealogists should consider. See image 1.
Image 1. 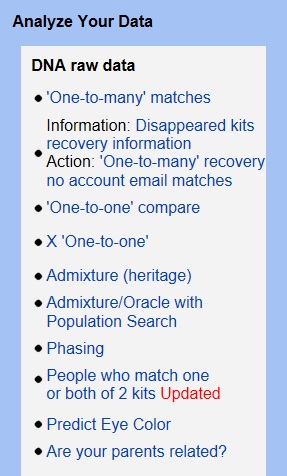 1. Are your parents related?  Some people may find that their parents are related to each other — maybe their grandparents were first or second cousins; maybe they came from an isolated geographic region or culture where intermarrying was common. This can make determining if a new match is maternal or paternal very challenging. Select Are your parents related? from the GEDmatch dashboard, and on the next screen enter your kit number. The results will paint your 22 chromosomes. If the bottom bar for each is solid gray, then you’ll see this message at the end: “No indication that your parents are related.” That’s good news! It will be a lot easier to work on your new matches if that’s the case.
2. If you are able to test one of your parents, GEDmatch has several ways to use that to find matches on the other side. Suppose you have tested yourself and your mother, but it’s your father’s line you want more information on.
2A. Choose the option People who match one or both of 2 kits.  Enter your kit number in the first text box and your mom’s in the second. What you’ll get back is a list of people who match both of you, followed by a list of people who match you but do NOT match your mom. That second list has your paternal matches. (It’s not a list of everyone who would match your dad if he had tested — it’s only a list of people who match the half of his DNA that you got. But if your goal is to find your dad’s ancestors based on your DNA match list, this is how you can figure out which of your GEDmatch cousins are paternal.) Of course, you can do the reverse too: if you have your dad’s DNA and are trying to identify your maternal matches.
Remember: matches under 10 or 15 cM may be false positives.
2B. To make it easier to check your paternal-only (or maternal-only)  matches in the future, if you have at least one parent tested, you can use the Phasing option. Input the child’s kit number and the parent’s kit that you have. GEDmatch will then create ‘phased’ kits that begin with P and end with a value that identifies whether this new kit is your maternal kit or paternal. For example, if your kit was A123456, you would get PA123456P1 and PA123456M1. These kits will show up on your dashboard where your kit number is shown, and you can use them just like you use your own kit number (e.g. for the ‘One-to-many’ matches query), but these Phased kits will never show up on anyone else’s match list.
Like the results from 2A, the DNA in example PA123456P1 only contains the DNA that you got from your father, not all the DNA he had. The new kit will total about 3500 cM; your dad would have had twice that amount, but that’s the amount he would have passed down to you. You can use this kit going forward any time you want to see a list of people who match you on your paternal DNA. The ‘One-to-many’ matches results using that P_______P1 kit will give you more information in a single glance than the People who match one or both of 2 kits.
3. Whether you have one parent tested or no parents tested, you can explore the Lazarus tool in the Tier 1 Utilities. Access to Tier 1 utilities costs $10 a month, but you have the option of subscribing for just one month and not renewing. See image 2.
Image 2. 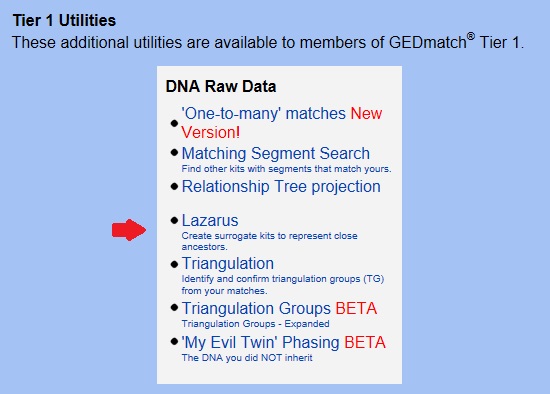 Let’s walk through an example where you do not have DNA from either parent, and you’d like to create a Lazarus kit for your father.
To create a Lazarus kit, you input GEDmatch kit numbers into two groups. Group 1 includes only direct descendants of the person whose DNA you are recreating. To create your dad’s Lazarus kit, Group 1 could contain the GEDmatch kits of any/all of his children, i.e. you and your siblings. (There is no value in entering an individual and that person’s child in the same group. So, using your brother and that brother’s child, no. Just add your brother. But if you don’t have DNA from your sister but you do from her son, then yes, include that nephew.)
In Group 2, you enter GEDmatch kit numbers of people biologically related to your dad who are not direct descendants. For example, your dad’s brother, his sister’s child, his first cousin. (Again, there is no value in putting someone and that person’s child in the same group. So, his brother and that brother’s child, no. But his brother and his sister’s child, yes.)
Spouse of the Lazarus target person, last I heard, is not being used for anything currently and can be left blank.
Give the new kit a name (e.g. My Dad, or whatever you want), and leave the segment thresholds at the defaults. Choose “Trial Run” to start.
What GEDmatch can do is build a kit that contains all the DNA segments where someone in group 2 matches someone in group 1. There is definite value in including your siblings as well as yourself in group 1. But group 2 is key: the more people you can include, and the more closely they are related to your dad, the more cM will end up in the Lazarus kit. You can run the tool as a ‘trial’ first, to see how ‘big’ your resulting kit is. If the tool finds more than 1500 cM of shared DNA between the two groups, you will want to run it again as ‘Full Processing” to actually create the kit. GEDmatch will produce a private kit starting with LL. Say you have successfully created a surrogate kit for your father’s DNA, even though neither your father nor your mother is still alive. You will be able to use this new Lazarus kit as any other kit. Like the P_______P1 kit, the LL______ Lazarus kit will not show up in anyone else’s ‘One-to-many’ matches results. But you will be able to use it to run the ‘One-to-many’ matches utility to find people who have DNA that matches your father’s surrogate kit. (Just as with regular kits, you may have to wait a day or two for the GEDmatch processing to complete before you can use ‘One-to-many’ matches.)
You may want to save a list of the people you entered in creating the kit. As you find more matches over time, esp. close cousins, you may want to build a bigger  Lazarus kit. You can put the original people in Group 1 (unless you’ve discovered new siblings you want to add). In Group 2 you can re-enter the original group 2 kits and add the new cousins’. Or, if you haven’t changed Group 1, in Group 2 you can simply enter the existing Lazarus kit and add the new cousins’. Then create a new Lazarus kit and delete the old one.
With enough quality matches, eventually you may be able to create Lazarus kits for grandparents as well as parents, following the same formula: descendants of the targeted kit in Group 1, and non-descendant biological relatives of the targeted kit in Group 2. It won’t be all their DNA, but it can be a time saver. You can run one-to-many with your parent’s Lazarus kit to see what new cousins match the DNA you’ve identified as that parent’s.
For more information on the Lazarus process, see the GEDmatch wiki.  Blaine Bettinger has blogged about his use of Lazarus to create a surrogate kit for his grandmother here
and here. Roberta Estes also has a detailed blog post on the subject  here.
Facebook has a group called GEDmatch.com User Group, which you can join if you’d like a place to ask questions and learn more about various GEDmatch utilities. Facebook also has a group called GEDmatch Lazarus Tool, which you can join if you’re interested specifically in that topic.
These are just some of the ways GEDmatch can help us in our genetic genealogy. Figuring our whether new cousins are paternal or maternal is a great way to start.
Ann Raymont © 2018