Rumor has it that AncestryDNA and FamilyTreeDNA are working on updates to their “ethnicity” reporting. Since this is the month many of us celebrate being Irish (AncestryDNA is even offering a $10 discount on DNA kits in honor of St. Patrick’s Day), I thought I’d take a minute or two to muse over this question:

How can two full siblings (as seen in the pie charts above) have such different ethnicity reports?

(A better term might be “admixture” or “biogeographical” reports, but since AncestryDNA labels it “ethnicity”, I’ll use that term here.)

First of all, it’s always worthwhile to remember that, as the esteemed Legal Genealogist Judy Russell says, “It’s not soup yet!” (See her 2015 blog post on the subject here: http://www.legalgenealogist.com/blog/2015/02/22/making-the-best-of-whats-not-so-good/.)

Every testing company develops its own algorithms and uses different reference populations to determine their predictions. That’s why AncestryDNA may produce different results than FamilyTreeDNA, and that will be different from 23andMe (which doesn’t even separate out Irish from British). GEDmatch has multiple different ‘admixture’ calculators to try, each with markedly different reference populations. Consensus among genetic genealogy leaders is that these companies may reliably say we have Ashkenazi Jewish roots, or African, or Native American or other bio-geographical heritage on a continental level, but they aren’t yet able to be accurate about countries within Europe, for example. It’s mostly just fun to play with, at this stage.

And even if all the companies eventually produced extremely accurate and detailed ethnicity forecasts, two siblings could still show different results, even at the same company. The reason for this is simple: unless we’re talking about identical twins, two siblings don’t have the same DNA.

Remember, last month, I wrote about how Margaret and Ann got different amounts of DNA from different grandparents, and I shared this visual on chromosome 6: 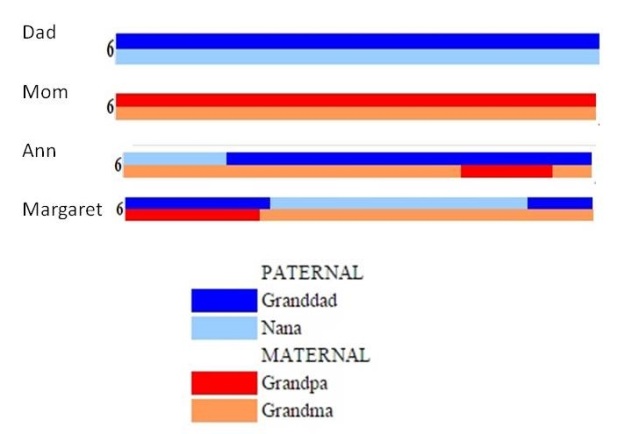 As it turns out, Granddad was 100% Irish: his father was born in Ireland and his mother’s parents were born in Ireland. Ann got more paternal DNA from Granddad on chromosome 6. whereas Margaret got more paternal DNA from Nana, whose roots were more British and German. This is just an example from one chromosome (I’m still working on mapping the rest), but I wouldn’t be surprised if in the long run, Ann has more than 25% from Granddad and Margaret has less. (Obviously, there is also some Irish on the maternal side, for Ann to end up more than 50% Irish.)

So — that’s one big reason why full siblings will seem to have different ethnicity based on DNA. Related to that is the other explanation: there’s a difference between our genealogical tree and our genetic tree. As we go back generation after generation, we get less and less from each ancestor. Hypothetically, based purely on averages, we might expect to get 25% from each grandparent (though we’ve already seen that doesn’t always happen that way), which might be 12.5% from each great-grandparent, working its way down to less than 1% from each of our 128 5x-great-grandparents. What happens is that, beyond a certain point, instead of chromosome slivers splitting into smaller ones, the little segment from the ancestor either gets passed down intact or gets dropped.

Bob Jenkins has estimated, for example, that 8 generations back, you would have 256 genealogical ancestors (*) but you’d only have DNA from on average 200 of them. See his post here: http://burtleburtle.net/bob/future/ancestors.html. Blaine Bettinger illustrates that visually, with a very clear explanation, at http://thegeneticgenealogist.com/2009/11/10/qa-everyone-has-two-family-trees-a-genealogical-tree-and-a-genetic-tree/.

Of those 256 ancestors, Ann might have have inherited DNA from a different 200 ancestors than Margaret did. Their genealogical trees are identical, but their genetic trees are not.

That might contribute to slight ethnicity variances too. In this case, there’s no Native American involved, but if one of those 256 ancestors was Native American, either or both or neither Margaret or Ann might have gotten that measurable DNA sliver among the 200 they did inherit DNA from. Genealogically, a person might have Native American ancestry and still not see it in their genetic family tree/ethnicity.

So, have fun with those ethnicity reports, don’t take them too seriously, and whether they reveal any Irish ancestry or not: Happy St. Patrick’s Day!

(*) of those 256 ancestors, some might also be repeats. In Colonial America or other endogamous regions, people might marry first or second cousins, meaning that the same person or couple might appear in more than one slot in your family tree.